Vigor2860 LTE Series is a firewall router that features all the specification as Vigor2860 Series, but built in a 3G/4G/LTE modem that works with a standard size SIM card, this provides the router wireless Internet connectivity without the need of an external USB modem. Like Vigor2860 Series, it has built-in a VDSL/ADSL modem that is compatible with variants of ADSL and VDSL, there is also a Gigabit Ethernet WAN port can be used with a cable modem to connect to a second line for load balancing or failover.

If you have another SIM card, the USB ports can be used with a 3G/4G/LTE USB modem to add extra Internet connectivity. Vigor2860 LTE Series offer features including VPN, Firewall, Content Filtering, and central management solution for Vigor access points and switches, which makes it the perfect solution for a small-medium business.

Vigor2860 LTE Series has built-in an LTE modem that accepts the standard size SIM cards. It works with worldwide cellular networks including 4G and 3G, thus can automatically fall back to 3G when 4G is not available. While using the data services of the SIM cards, the SMS service is also supported. Receiving and sending SMS messages can be done from the router's Web User Interface, you may also configure the router to send notifications via SMS, moreover, commands can be sent to the router via SMS to initiate a router reboot or status report.

Except for the DSL interface and the SIM card slot, there is also a Gigabit Ethernet WAN port that can be used for any types of connection and add an additional connectivity to share the traffic load. An additional 3G/4G/LTE USB modem can also be attached to the USB port of the router to add a backup wireless connectivity. In fact, all of the WAN interfaces can be configured to operate in either Load Balancing mode, which will be active all the time, or in Failover mode, which will be active only when detecting connection loss or heavy load on the primary connection.

On Vigor2860 LTE Series, Load Balancing can be set in either IP-based mode, which means the packets destined to different IP address will be distributed across different WANs, or Session-based mode, which means the packets belong to different sessions can take different paths, this allows a multiple-session connection to be established across multiple WANs, and the maximum data rate will be all the WAN's bandwidth combination. Policy-based Load Balancing is also supported so that you may specify the path for some certain packets.

To increase network accessibility more, Vigor2860 LTE Series also supports High Availability feature and allows one or more redundant Vigor2860 LTE to be added to the network and operated in standby mode. 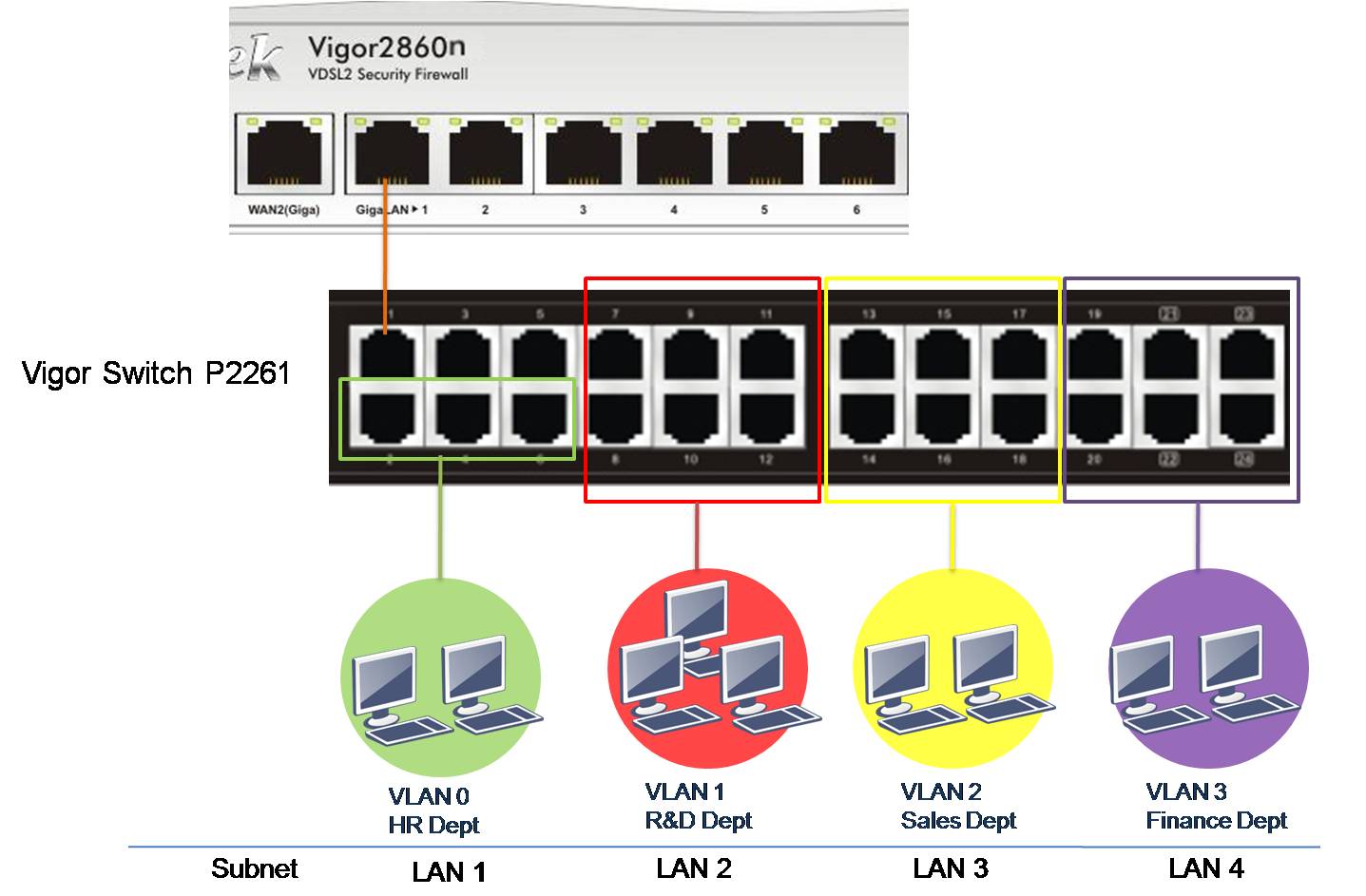 The 6-port Gigabit Ethernet switch on the LAN side provides high-speed connectivity for the servers and PCs on the local network, and the Virtual LAN (VLAN) features allow you to separate the LAN clients into different logical domains thus to increase the security and network efficiency. Vigor2860 LTE Series supports 802.1Q standard and can build a Tag-based VLAN system with an 802.1Q-support switch, Port-based VLAN is also supported that each LAN port can be configured as a member of different VLAN and be isolated from each other without the use of VLAN tag. Moreover, up to 6 IP subnet can be set up on Vigor2860 LTE Series, so each VLAN can use a different IP addressing space.

Since firmware v3.8.4.3, Vigor2860 LTE has implemented an integrated solution to work as a public Wi-Fi hotspot. While providing Internet access to the guest users, the Hotspot Web Portal can be used to collect the users' information, informing the terms and conditions, and presenting a landing page to them.

Vigor2860 LTE Series supports Stateful Packet Inspection (SPI) Firewall and flexible filtering rules, it can accept or deny packets based on the information in the packet header (such as source IP, destination IP, protocol, and port number) or the packet's application. IP-based restrictions can be set to filter certain HTTP traffic as well as various application software and help you to prevent time and network resource wasting on inappropriate network activities.

Vigor2860 LTE Series supports both LAN-to-LAN VPN and Remote Dial-in VPN, up to 32 VPN tunnels can be set up simultaneously. All the industry standard tunneling protocols are supported, including PPTP, L2TP, IPsec, and GRE, and it's compatible with 3rd party VPN devices.

Vigor2860 LTE Series also supports SSL VPN - a type of VPN based on the very common encryption method which is used by all the HTTPS websites. While the traditional VPN protocols might be filtered by the firewall and NAT of public networks, SSL VPN will be passed as long as the HTTPS is allowed. DrayTek also offers free official client App for Windows, iOS, and Android.

VPN Trunking is also supported by Vigor2860 LTE Series, this allows you to establish two VPN tunnels to the same remote site through different WAN interfaces. The two trunking tunnels can be set up in load balancing or failover mode.

Vigor2860 LTE Series can act as a Central Management portal for all the Vigor devices on the network, including VigorAP, Vigor Switch, and even Vigor Routers. With Central Management feature, device maintenance (such as firmware upgrading, configuration backup and restore) and monitoring can all be done from a single portal, which is the Web User Interface of Vigor2860 LTE Series.

Vigor2860 LTE Series can manage up to 20 VigorAPs on its LAN and works as an AP controller. Automatic Provisioning can be triggered when a VigorAP newly join the network and this makes AP deployment faster. You may also get the client or traffic history of all the AP from Vigor2860 LTE Series, and set up load balancing rules for the AP.

Central Switch Management allows you to manage up to 10 Vigor Switches from Vigor2860 LTE Series, the status of each port can be directly viewed from the router.  Vigor2860 LTE Series also supports VLAN configuration for the switches, setting that matches the router's VLAN settings and the switch hierarchy is automatically provided which makes the VLAN configuration much simplified.